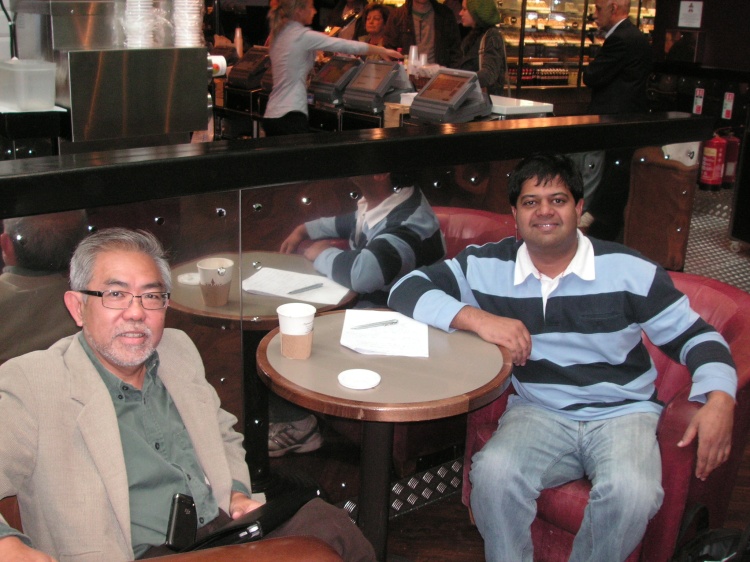 Singapore’s façade democracy needs to be challenged if citizens want their political rights – this is what I took away from my one hour conversation with Tan Wah Piow at London Heathrow Airport on 19 September 2010.

For Wah Piow, the political challenge that Singapore faces today, compared to the time he was active in the early 70s, is in essence still the same. Singapore has a constitution that offers its citizens certain freedoms but these have been subverted by a series of conditions placed on them. This is what makes Singapore, in Wah Piow’s words, “a façade democracy” – a pretence democracy.

About a week earlier I was in the United Kingdom to present a paper at the Oxford Internet Institute’s conference (http://microsites.oii.ox.ac.uk/ipp2010/programme/55) and to do some networking when I was introduced to Tan Wah Piow by Margaret John, an Amnesty International coordinator. At that first meeting we exchanged preliminary pleasantries and agreed to a one-on-one chat to discuss Singapore politics.

Tan Wah Piow is known in Singapore as a former student activist who was detained in 1974 and who later sought political asylum in the UK after his release in 1975. His name was again evoked by the PAP government during the 1987 alleged Marxist Conspiracy as the “mastermind” behind the plot.

34 years on after arriving in the UK and sitting at London Heathrow airport, Wah Piow didn’t at all strike me like what the PAP government or the local mainstream media made him out to be. He had a pleasant disposition about him, was smartly dressed and is now a lawyer with a successful legal practice that employs 13 lawyers. He is also married and has a 26 year old son.

So it was indeed a bonus to meet this Singapore political icon and to have the opportunity to ask him several direct questions on politics back home. Most pressingly, I wanted to know if the main issues or political challenges have changed since his university activism days in 1973 and now in 2010.

As mentioned in the opening of this article, for Wah Piow the primary political challenge has not changed. Singapore is still a façade democracy, but the environment in which the people fighting to change it has changed. Wah Piow feels that the environment in which activists are now operating and challenging the PAP has changed compared to the 70s which were far more restrictive.

There have been some changes to the constitution leading up to today, but these have not been fundamental. What is most important to note is that over many years there still has been no change of heart in the PAP government when it comes to political freedoms. The challenge therefore is to ensure that those who subvert the constitution are held politically accountable.

He added further that the PAP government over the years has managed to install in Singaporeans a “culture of silence”. As a result, people keep silent even though they know something is going wrong. This he said has to change too.

Wah Piow felt that the reason that he was detained was not so much that he was against detention without trial or supported democracy. Rather it was because he was prepared to ignore the restrictions imposed on his political rights and dared to stand in public solidarity with disfranchised workers. This act of political resistance is what most irked the PAP.

For him, today’s activists are articulating more directly the issues of democracy. These issues are not new but they are being raised publicly although the regime is the same. Current day activists are able to raise these issues now directly because the world has changed with globalisation and the internet. Wah Piow has kept in touch with developments in Singapore over the years by meeting up with students, opposition politicians and activists who often come to meet and exchange views with him.

So has he been to Singapore to witness some of these changes first hand?

No he said, not since the last 34 years. He has been told informally via the Singapore embassy in London that there are still ‘unresolved’ issues even though he now holds a British passport. The nearest Wah Piow has been in recent years to Singapore is to Johor. There, from his hotel window he has caught glimpses of Singapore. It is also where he meets family and friends from Singapore. But his son, Wah Piow said, has been to Singapore.

With so much to chat about, the one hour we had went past quickly and I had a flight to catch. So I did what any writer would, I asked for a follow up interview. He agreed to answer several more questions following this article. So if you the reader have any questions please send them through via the TOC comment section and I will be happy to organise them into a manageable list and try to get some answers to them.

View this document on Scribd